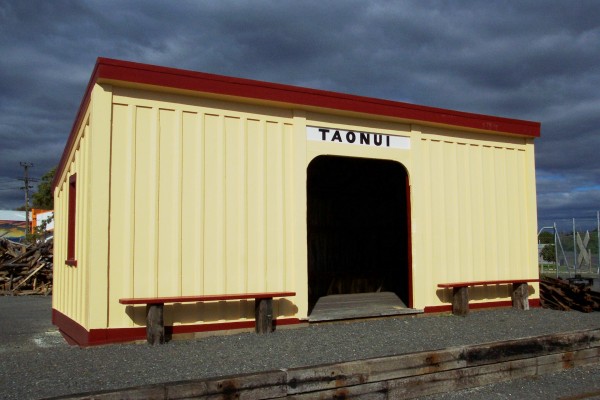 The station dates from about 1876, when the Palmerston North – Feilding section of the North Island Main Trunk opened. The station handled local farm traffic, but also was the junction for a short branch line which ran toward Colyton between 1879 and 1895. In later years large quantities of agricultural lime were railed to Taonui for distribution in the local area. Taonui Station was closed in the 1960’s.

The station was sited between Feilding and Bunnythorpe and had been stored not far from its orginal location on a farmer’s property. The farmer donated the station to us and we have made it part of our depot. Bob Judd and friends have worked hard and restored the ex-Taonui Railway Station.

On the 2nd of June 2002, the Rail Heritage Trust of New Zealand presented Feilding & Districts Steam Rail Society a Certificate of Merit for the Restoration of the Taonui Railway Station. Well done Bob Judd and friends.