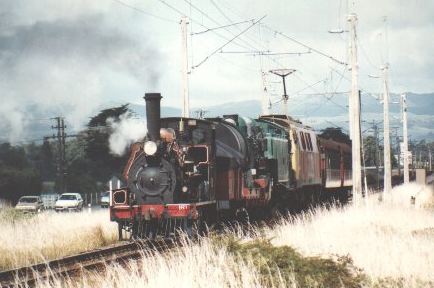 The Feilding and District Steam Rail Society was formed with the intention of rebuilding a steam locomotive. After a few months of negotiation we leased Wab794 from the New Zealand Railway and Locomotive Society. In January 1997 the Wab was inspected at Ferrymead and had servicing done to allow it to be towed to the North Island. The Wab was towed to Picton as part of a standard freight service, and crossed the Cook Straight on Thursday 20 Feb 1997. The Wab was towed to Palmerston North a few days later then it was stored in Palmerston North for a few weeks. The Wab was accompanied for all its journeys to keep a look out for hot bearings and other mechanical troubles.